Used mostly in structural engineering and/or architecture, a space frame (also called 3D truss or a space structure) is a rigid structure with truss-like composition that consists of several struts that are interlocked in a geometric pattern.

One of the biggest advantages of a space structure is its strength, which allows for the creation of large areas with little to no internal supporting structures – industrial buildings, stadiums, airports, and so on. This is possible thanks to the inherent rigidity of a space frame as a whole – it is somewhat similar to a regular truss, in that regard, since the pressure of the weight is transmitted to the entire length of each strut.

The most typical use case of a space frame is a rigidity matrix – a calculated net of space frame elements (usually – pyramid-shaped), and they’re usually built using either tubular steel or aluminum. Technically speaking, this kind of structure can be referred to as an isotropic vector matrix, and it can also be changed in many different ways – changing struts’ length to produce other geometrical elements as a structure.

There are actually several different systems that can be used to classify space frame structures. For example, here’s a classification of space frame types depending on the element arrangement order:

Triple-layered grid. There are three layers of space frame elements, with all three being parallel to each other. They’re linked with diagonal bars, and structures as a whole are flat most of the time.

Double-layered grid. Two layers of elements that are parallel to each other and connected with diagonal bars. 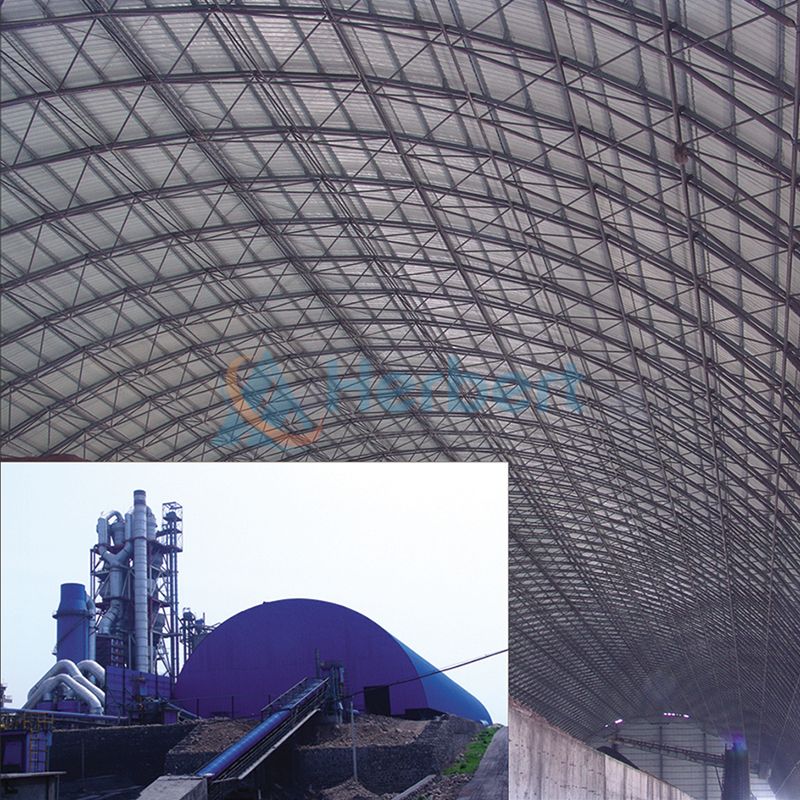 Single-layered grid. One single layer of elements located on the surface of a structure.

On the other hand, there’s also a less technical classification of space frame structures that takes the form of the overall structure as the distinctive metric. As such, we have three main space frame types:

Spherical domes (and other more complex shapes). Tend to require quite a lot of support from either outside of a structure or by using more pyramid-shaped or tetrahedral modules in the structure itself.

Barrel vaults. Typically does not require any kind of additional support as described before, but it does have a cross section as the means of inside support.

Space plane roof structures. A structure that is composed of multiple planar substructures. The entire structure is supported by the diagonals and the weight is distributed over the horizontal bars.

There are also a number of other types of structure that can be classified as space frames but do not belong to any of the categories above. Some of these structure types are hanging covers, pleated metallic structures, pneumatic structures, and so on.

ADVANTAGES AND PROBLEMS OF SPACE FRAMES

As a structure type, space frames are surprisingly effective in their own niche, offering a number of different advantages, such as:

As a consequence of space frame elements being easily stackable, the transportation cost for this structure type is rather low, and the overall transportation process is relatively easy;

It is probably the most suitable frame type for structures with abnormal or unusual shapes in their design, as a whole;

The entire structure also has pretty much the highest seismicity in comparison with other frame types;

The weight of the structure as a whole is distributed evenly, so there’s usually no singular weak spot in such structures;

It is the preferred structure type for most large buildings, as we’ve mentioned before;

It offers an unprecedented ability to cover lots of ground under one structure with no internal support and at a relatively low height;

Prefabrication and the whole nature of a space frame makes it easy to install once all of the elements are on-site.

However, it would also be fair to note down some of the disadvantages that come with using space frame structures – the most notable ones are:

The level of precision required when it comes to assembling space frame structures is rather high, and sometimes requires special machinery to perform completely, such as heavy-duty cranes;

There is a limit to how high a steel space frame structure can go without proper reinforcement and external support, and even the existence of reinforced concrete as a baseline has a 40 feet limit on the structure’s height when it comes to space frames.

While the Herbert space frame is not a particularly new version of a building structure, it has its own use cases and a large number of advantages. It’s true that it’s hard to imagine space frames used for something more mundane, like a residential structure, but it’s also one of the biggest advantages of space frames as a whole – more freedom with creative thinking and artistic expression for architects.

The fact that it’s rather easy to fabricate is also a great advantage – and with companies like Levstal, you can get your space frame elements in both small or big batches, since Levstal’s fabrication capability is rather high, and all of that is combined with the cutting-edge machinery for mass-production of tubes, joints, and so on.

Thank you for your message.